Last week, I shared a very traumatic scare with our daughter, Aria. For those who are unaware, she ruptured her spleen in Tomahawk, Wisconsin in a boating accident and had to be air-lifted to Marshfield, Wisconsin. Mom flew with her to the hospital while Dad (that’s me) and her two sisters had some work to do.

Namely, shut down the cabin, get the flotation toys on shore, and pack up for a trip to Marshfield. How long were we going to stay? At this point we had no idea. We had one more challenge: our 100-pound lab, Harvey. Where would he go? It was Saturday of Memorial Day Weekend. There were no kennels open… or so we thought.

A kind nurse overheard our conversation at the hospital in Tomahawk and suggested Dragon’s Heart Kennels. It was fairly new and had wonderful owners, we were told. She gave us their phone number. Mike picked up the phone on the second ring. Before I go on, here is what I know about most businesses: they have strict hours during which customers can get a hold of someone. Not at this wonderful place.

I explained my emergency and he said, “I’ll be here. Stop by and we’ll care for him until whenever you return.” What a relief! 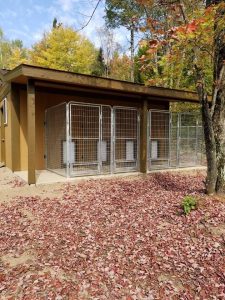 When I drove Harvey down the winding driveway, I found a dog paradise. Heck, I would stay there! As you can imagine, at the time of dropping off Harvey, my mind was only focused on getting in and getting out. A week later, when I picked Harvey up, I had a chance to look closer at the facility and talk to Mike.

Mike explained that he worked at a local factory for years and had been dreaming, for some time, about opening a kennel. He praised his wife for being brilliant with managing money and making the dream a real possibility. Together, they decided to go for it and open Dragon’s Heart! I learned the name refers to one if his favorite dogs that passed. He’s been open less than a year and his business is already booming.

Mike and his wife are two people that won’t be on their death bed wondering, what if…? They are living life to the fullest and have taken a calculated risk to enrich both their lives. Truly inspiring.

ACTION PLAN: So, do you have a dream you should be getting after?