How Can a Hat Be So Revered?

When it was the very one worn by Abraham Lincoln on the day he was assassinated.

Our kids are at that age when they are aware of the history of our country, so we decided to spend Spring Break visiting some historical sites. Included in the trip: Williamsburg, Virginia and Washington D.C. During our stay, we logged almost 40 miles of walking. The visit was a memorable one that brought out a deep sense of patriotism and appreciation in me.

This photo was taken at Smithsonian’s National Museum of American History. It’s hard to believe that Lincoln’s hat was retained from that tragic and mournful day. The placard indicates that this artifact is the most treasured of all the Smithsonian’s inventory. 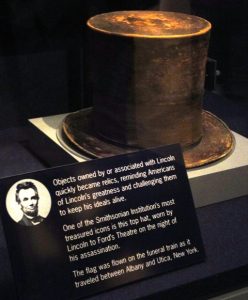 What a great man. Have you heard of Lincoln’s leadership style? I read that Lincoln never gave direct orders in telling people what to do. He felt it was much more dignifying and effective to share a story and allow the person to make their own decision. Lincoln’s stories were powerful. Many would argue that after hearing one, you knew exactly what to do next!

Leadership of this caliber is rare in today’s world. Lincoln led with a calm focus. If you read his speeches and writings around the time of the Civil War, he never talked negatively about the south. He never pointed fingers or spoke ill of any American. He simply knew slavery was wrong and the American union needed to become one house.

What do you believe? Are you willing to let people know your beliefs? Are you able to do so while keeping the dignity of others in mind?

If so, you are rare indeed.