Imagination: The Power to See What Isn’t

One of the most remarkable traits of our humanity is our ability to imagine. I remember visiting EPCOT Center at Disney World. There, they had a ride called Journey into Imagination. There was a little dragon named “Figment” who led you through imagining strange and unique things.

The power of a strong imagination is what makes people successful. Daydreaming is related to this ability to see what isn’t. Children have a fresh imagination that allows their brain to imagine without the restrictions of time and place. They don’t know the laws of physics—why couldn’t a bike fly? 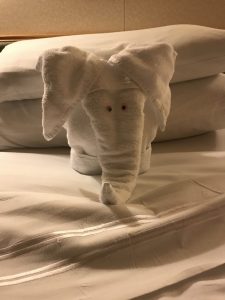 Take the picture in this post. Before imagination took over, it was simply a towel. It’s not a towel, it’s an elephant!

Do you allow your team members to imagine? Are they involved in brainstorming solutions and new ideas? A culture of imagination helps companies stay ahead of the change that is always presenting itself. It allows for new ways of thinking and doing things.

Here’s a challenge. Announce to your team that you will be holding a 30-minute session on imagining new ways to do things. Let them know their ideas can be crazy and outlandish. Give them less than three days to prepare and see what happens!

Go ahead, imagine. I dare you!