Learn How to Surrender!

The idea of “surrendering” is not new. Many folks relate it to biblical passages and ideology. The same thinking can be applied to business as well. I think most people understand its basic concept: to let go and trust that things will fall into place, without worry.

I thought about this topic based on a recent drive I made alone with my lab, Harvey, to our cabin up north. I was in Bonduel and accidentally shot past the exit for gas. I had less than a quarter gallon. My car informed me that I could travel another 38 miles. I marked my speedometer and thought, “Clintonville is less than that. I should be fine.” 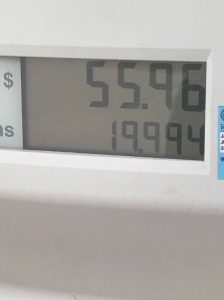 I later realized that Clintonville is 48 miles past the Bonduel exit! The ride, once I hit 38 miles, was a bit of a nail-biter for me as I didn’t have a leash for Harvey if I were to run out of gas. Furthermore, there was very little civilization along Highway 29 at that location. My mind began to make up horror stories. I had to make a decision, so I decided to surrender.

I cranked up the music and began to jam out. I even sang out, “I surrender!” Lo and behold, the Clintonville exit appeared like a welcomed friend. I pulled up to the convenience store pump to fill up my tank. The jeep holds 20 gallons. You can see how much I put into the tank. I had to take a picture of it!

I have found at work that if you have systems in place, clear goals and talented people, you have done everything you can to succeed. When you’ve done what you can, it’s time to surrender to your talented and competent co-workers. They are committed, they are capable and they are better than you at what they know how to do!

When you are running on fumes, it’s time to surrender! How? Get curious and ask for help.

ACTION PLAN: Trust is all about surrendering to others. Our next S.L.O.W. speaker will be doing a workshop on building trust. You’ll want to be sure not to miss it!